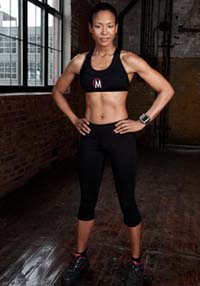 New York, NY (BlackNews.com) –Last month, Harlem’s Jennifer Turner was recognized as one of five running enthusiasts tapped to become the faces of the ING Runner’s Nation ‘ING Class of 2012’ for this year’s New York City Marathon, which takes place on Sunday, November 4. As one of the official faces and voices for the “ING Class of 2012,” which represents all registered runners in this year’s ING New York City Marathon, Ms. Turner will share her personal stories and training tips via ING branded Facebook, YouTube and Twitter pages as she prepares for the big race. On August 25, Ms. Turner will bring her athletic talents and inspiration to run in the 2012 Percy Sutton Harlem 5k Run/NYC Family Health Walk-A-Thon.

“The ING New York City Marathon is already known as the ‘World’s Race,’ said Ann Glover, chief marketing officer at ING U.S. “We hope these ‘ING Class of 2012’ members and their efforts through ING Runner’s Nation can further expand the magic and allure of this great event.”

“I am so honored to be recognized by ING U.S., the title sponsor of the ING New York City Marathon, and to have an opportunity to encourage and motivate others on such topics as training, nutrition and hydration, injury prevention, athletic gear and more,” said self proclaimed “Fitness Activator,” Jennifer Turner. “More importantly, this national recognition gives me the platform to inspire the 32 women that I am training on my own in my community of Harlem to run in their first-ever racing event during Harlem Week 2012. It shows them that they too can achieve any goal they put their mind to.”

By day, Jennifer Turner is a high-powered media executive. By night, Ms. Turner life’s mission is to empower others to “activate” their innate ability to have a healthy lifestyle and achieve happiness. A certified American Council On Exercise (ACE) Group Fitness Instructor and a Lifestyle and Weight Management Consultant, Ms. Turner was not always “fit.” As a teenager, she developed eating disorders and truly struggled with her weight. In 1998, while attending Stanford University’s Business School, Ms. Turner was tired of crash diets and decided to make a life change. She embraced fitness and stopped focusing on the results, but rather focused on the process of living an active lifestyle. Fast forward to 2012, Ms. Turner has completed 6 marathons, including the Boston Marathon (twice) and the New York City Marathon (twice). She has also completed 11 triathlons and is currently an Athleta sponsored athlete. This fall, she will run not only in the New York City Marathon, but also in the Malibu Triathlon and Chicago Marathon.

Moreover, with her passion to inspire and create healthy communities across the country, Ms. Turner has worked as a fitness consultant for the Harlem Children’s Zone Adult Fitness Programs teaching exercise and fitness support classes to the Harlem community. She is currently teaching weekly fitness classes at the Harlem School for the Arts. Since June of this year, Ms. Turner has been training a group of women, whose ages range from early twenties to early seventies, to run in the Percy Sutton Harlem 5k Run/NYC Family Health Walk-A-Thon during Harlem Week 2012.

From weekly nutrition counseling to marathon fitness training, Ms. Turner has prepared her students to be competitive participants in their first ever race. Her only requirements during the free 9-week training period were to come to the weekly practice, blog once a week to inspire others, and bring a friend to cheer them on during the race.

“I’m so excited to play a small role in helping these women in their health and fitness journeys. It’s been a pleasure working with them, as well as watching them grow and take charge of their health,” said Turner who is sponsoring five of the 32 women in the race. “I truly admire them and am so very proud of these determined women.”

For more information on Jennifer Turner, visit www.jenniferturner.com. To learn more about her fitness training and class schedule, visit www.MadCoolFitness.com. For media inquiries, contact Tyrha M. Lindsey of L.A.I. Communications at 908-672-6024 or via e-mail at Tyrha.Lindsey@laicommunications.com.